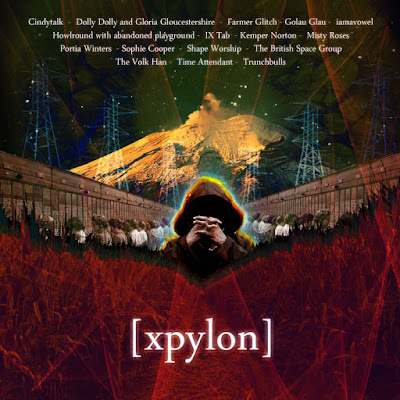 Once upon a time there was a radio show, then there was a series of live gigs and events. Eventually, there was a record label. They were all called Exotic Pylon. There was one man who was the creator, curator and driving force behind all these things: a man called Jonny Mugwump. Jonny is as close to a raging Darwinian force of nature as you could ever meet. He's a whirlpool of creativity and enthusiasm. He was the pied-piper and we all followed him, sucked in by his strange gravitational pull towards an event horizon of his own making. Once you were there inside the Pylon universe, anything could happen.

The first year of the radio show on London's Resonance FM was a scattershot affair. It was if the contents of Jonny’s brain were jammed into a blunderbuss and shot into the mic. As the years went on, he was joined by various ne'er-do-wells playing live, who filled the tiny studio to the brim, often times spilling out into the station's carpark outside. Paul Snowdon (Time Attendant) began to co-host after a while. You would think this would have had a stabilizing effect on Jonny and the show (Paul Snowdon was and remains the single most laid back man in creation), but no. They spent many a time broadcasting throughout the night, widely improvising madcap electronic soundscapes to anyone who happened to tune in at 3am. The show was as eclectic as they come. Anything and anyone came and went. It started to become a hub for eccentrics to ply their wares or just hang out while Jonny somehow seemed to hold it all together by the skin of his teeth.

It seemed only natural for the show to move into the live arena and there then followed over a year of live gigs in London. They were, like the radio show, ramshackle affairs where anything could happen from one show to the next. There was never anything uniform about Exotic Pylon. It was never pin-downable. It was always on the move. Always moving. Always exciting. There were nights where magic would happen. Where you would see combinations of acts that could’ve only been programmed deep inside Jonny’s hyperactive brain. There was nothing like it. And I don’t think there ever will be again.

The record label became a combination of all that had gone before. Each release was completely unique. There was no through-line of sound. No label aesthetic. The one thing they all had in common was they had nothing in common. From torch songs to folk, from electronica to spoken word. All human life was on the label (assuming the human life was slightly lop-sided and walked with a limp).

The one thing that united everyone on Exotic Pylon was a sense of comradeship. We were all proud to have been involved in some way or another. We were all members of the same invisible college. Almost without exception we all kept in contact with each other once the label had died. It may have disappeared but its spirit has remained.

So, with that in mind, we present XPYLON, a compilation of ex-Pyloneers. Each track is brand new and exclusive to the release. There are supergroups, individuals and collaborations, all of which evoke the heady days of the once great Exotic Pylon.


Every year, one in four of us will experience a mental health problem. But hundreds of thousands of people are still struggling.

All proceeds from the album are going to Mind, the mental health charity.

Mind believe no-one should have to face a mental health problem alone. They will listen, give you support and advice, and fight your corner.
Posted by Dolly Dolly at 23:56